The first superstar signing of Futsal Oz Live has arrived in Melbourne ahead of Australia’s biggest-ever futsal event this Saturday evening.

Vanessa Pereira – regarded as the best female futsal player in the world – has touched down in Melbourne and has already hit the courts in preparation for the July 2 event at the State Netball Hockey Centre.

Known as 'Vanessa 7' on the futsal scene, Pereira plays at a professional level in Brazil her club Athlete Signal Calcio C5.

She is also the captain of the Brazilian national futsal team.

In the lead-up to Futsal Oz Live, Vanessa is assisting with the Futsal Oz school holiday programs across the three stadiums. 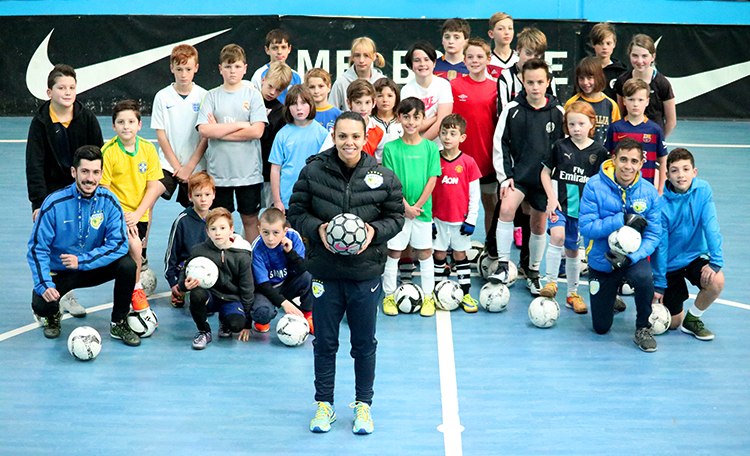 Periera will play in an all-womens match, suiting up for FC Melbourne who will take on a talent-filled representative team from Sydney.

The women’s match is the second game of three. Mens teams Carlton and Balwyn will play the first match, followed by the capital city womens clash before the feature match of the evening between Pascoe Vale and Fitzroy. This game will include futsal god Falcoa and international football star Douglas Costa.

Also competing is Welsh-born goal-scoring machine Rico Zulkarnain who will suit up for Fitzroy FC.

Honestly, futsal is my life. It’s the thing that drives me

I can make a living from futsal because it’s the sport that I love.

In my opinion, in all the interviews that I’ve given, I believe that futsal is in my blood.

Dad and Mum didn’t have a lot of money, my school offered us a place to live so I had all of the sports there. While my parents worked, the PE teachers took me to the sports court. I had all the sports there – basketball, volleyball, handball – I had everything. But it was futsal that I wanted.

When I received the invitation to Futsal Oz Live, they told me about this rivalry (between Victoria and NSW).

And it made me very happy because when you have pressure, you have responsibilities.

I will do the best I can, I hope to make a contribution for my team, winning the game and playing well.